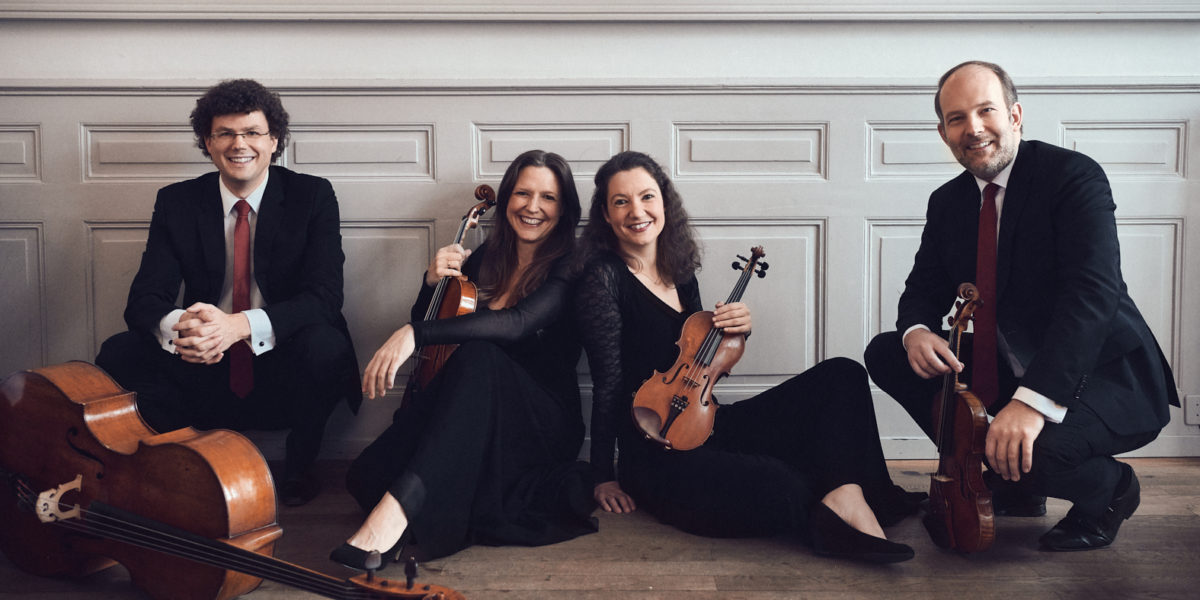 The Amaryllis Quartett with Gustav Frielinghaus (violin), Lena Sandoz (violin), Mareike Hefti (viola) and Yves Sandoz (violoncello) has regularly thrilled audiences and the critical press alike. Reviews describing the quartet as “compellingly refreshing and intelligently unconventional”(BNN) and praising its “astoundingly immaculate technique” (Süddeutsche Zeitung) confirm the ensemble’s status as one of the most outstanding string quartets of its generation.

In its recital programming and its recordings, the Amaryllis Quartett places classical quartet literature alongside newer compositions in order to create new listening experiences. Premiere performances of works by composers such as Johannes Fischer, David Philip Hefti or Lin Yang are given as much importance as the rediscovery of forgotten masterpieces such as the string quartets of the Hungarian composer Géza Frid.

The four musicians, who studied with Walter Levin in Basel, subsequently with the Alban Berg Quartet in Cologne and with Günter Pichler in Madrid, have won numerous international prizes, among them the Finalists’ Prize at the Premio Paolo Borciani 2011 in Reggio Emilia and only four weeks later First Prize and the Monash University Grand Prize at the 6th Melbourne International Chamber Music Competition. In 2012 the quartet was also awarded the Chamber Music Prize of the Jürgen Ponto Foundation.

Concert tours have taken the Amaryllis Quartett to the Alte Oper Frankfurt, the Tonhalle in Zurich, Vienna’s Musikverein, Teatro della Pergola in Florence, Gran Teatro La Fenice in Venice and Dai-ichi Seimei Hall in Tokyo. The ensemble is a frequent guest at festivals including the Schleswig-Holstein Music Festival, the Schwetzingen SWR Festival, Heidelberger Frühling, as well as the Rheingau Festival and Lucerne Festival.

The quartet has also inaugurated its own recital series at the Concert Hall in Solothurn Switzerland and is performing a cycle entitled amaryllis 3×3 at the Laeiszhalle Hamburg, the Lübecker Kolosseum and the Radio Bremen Sendesaal.

The 2011 release, White, with works by Webern and Haydn, won the ECHO Klassik Award as the best chamber music recording in 2012. This CD marked the beginning of the highly acclaimed “Color Series,” in which works from different historical periods are juxtaposed in each release. The present release, Yellow, is the final installment in the series.

In addition to its busy concert career, the quartet is also very devoted to passing its experience on to other musicians. For example, it gives master classes, and a number of its members also teach chamber music classes at German state music conservatories.