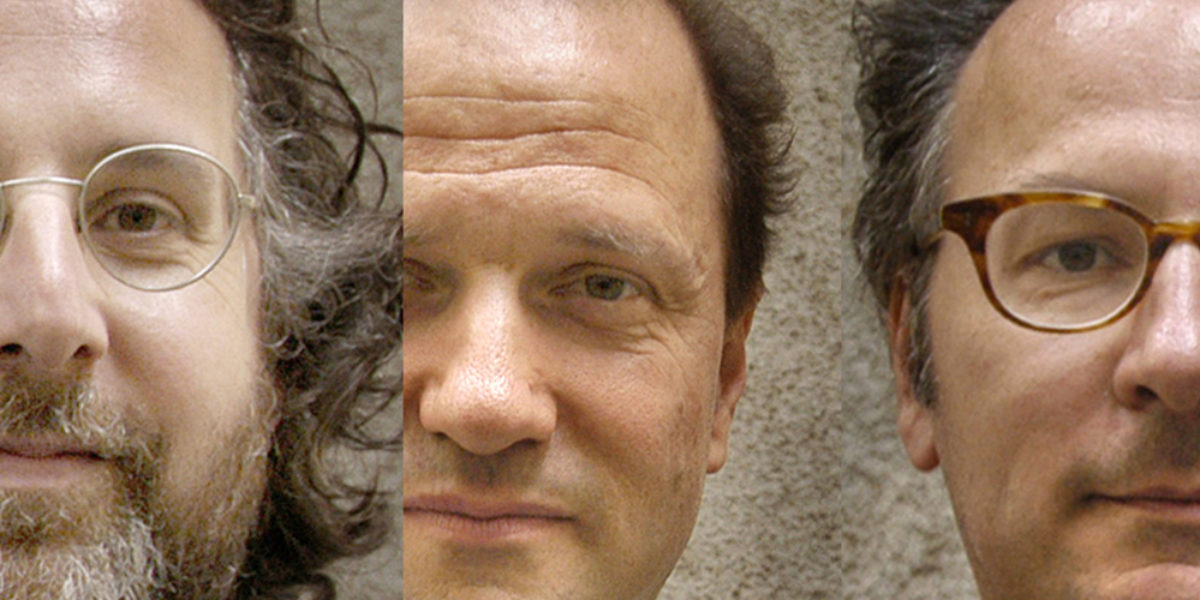 The “cult hit” of the 2003 Berlin Jazz Festival, Bern, Brody & Rodach brings together the unlikely combination of accordion/piano, trumpet and guitar to create surreal and evocative soundscapes of great beauty and playfulness.Haunting the intersection of film music, ambient jazz, New Jewish Music and free improvisation, all three players are acclaimed composers and bandleaders with their own individual voices.
On the band’s first CD, “Triophilia” (Jazzwerkstatt), Bern, Brody & Rodach play all original compositions that invite listeners to dream, dance, and join them in their “love of the trio.”

Composer/pianist/accordionist Alan Bern is a Bloomington, Indiana native living in Berlin for more than 20 years. He is founder and leader of many projects, including Brave Old World, Diaspora Redux, The Other Europeans, Yiddish Summer Weimar and the Other Music Academy. A pioneer performer and teacher of new Yiddish music, in 2009 he received the Ruth Lifetime Achievement award. He has performed and recorded with Itzhak Perlman, Andy Statman, the Klezmatics, Guy Klucevsek, the Klezmer Conservatory Band, and many others. He has been featured on national and international radio and TV, and his recordings are available on Winter & Winter, EMI, Red House, Pinorrekk, and others.

Composer/trumpeter Paul Brody is a San Francisco native living in Berlin. His band, Paul Brody’s Sadawi, has three CDs on the Tzadik label. Paul has worked with such greats as Barry White, Wim Wenders, The Supremes, Blixa Bargeld and The Einstürzende Neubauten, Theodore Bikel, Carlos Bica, The Klezmer Conservatory Band, David Moss, Shirly Bassy, David Krakauer. He has been featured at many major festivals from the Berlin Jazz Festival to the Krakow Jewish Culture Festival to the Chicago World Music Festival. In addition to his solo career, Paul composes and produces children’s music for Oetinger Publishing and radio shows for WDR. His songs have been on the top 10 hits at WDR radio and on a ‘Favorite Songs’ sampler put out by EMI/Virgin records.

Composer/guitarist Michael Rodach lives in Berlin. He has composed many works for film, radio plays and contemporary dance, and has worked with choreographers and filmmakers such as Snappy Dance Theatre (Boston), Pilobulos Dance Theatre (Washington Depot), Dieter Heidkamp, Gayle Tufts, Helga Reidemeister, Andrea Getto, Regine Ahrem. He has performed both live and in studio productions with David Moss, Xiame, Teo Macero, Bob Moses, Tiger Okoshi, Paul Moura, Kevn Coyne, Georgette Dee, Ed Schuller, Mack Goldsbury, Shank and Robert Wilson, among many others. A compilation of his work for contemporary dance and films has been released in a RODACH CD series available at Traumton-Records.